British loudspeaker manufacturer, Funktion-One, has chosen Prolight + Sound Frankfurt 2016 for the launch of the first touring product from its Evolution Series. The Evo 7T sees the Evo 7E adapted for touring applications, following demand from distributors and rental partners.

Funktion-One’s Evo7T features integral flying gear and will be available with a weatherproof black polyurethane coating and grille designed for the requirements of live and theatre applications. A grille-less version and colour options will be available in the future.

The Evo 7T is fully horn-loaded with 15in mid-bass, 10in Funktion-One signature mid-range and a 1.4in compression driver. It has 40° nominal horizontal dispersion and physically arrays at 30° three wide, giving smooth coverage to 100°.

Funktion-One’s Evolution Series marks a significant step in development for the company. The range boasts two dispersion options – the Evo 6 with 50° and the Evo 7 with 40° horizontal dispersion. Both versions are fully horn-loaded with 15in mid-bass, 10in Funktion-One signature midrange and a 1.4in compression driver solely for high frequencies above 4kHz. The range boasts skeletal options, as well as grouped configurations, such as two-wide and three-wide.

Since the Evolution Series was launched, Funktion-One has experienced huge demand from around the world. The applications they’ve been specified for are wide ranging, covering live, touring, nightclubs, theatres and sports stadia. The addition of a tour-ready version of the Evo 7 is bound to see the use of the Evolution Series grow, particularly in live and touring.

From the sales to rental companies and distributors in countries including France, Germany, The Netherlands, Belgium, Greece, Austria, Croatia, Ibiza, Lebanon, Romania, China, Korea, Australia, the US and the UK and subsequent use on tours, for live events and temporary installations, to the high-profile venues that are known for the clarity, coverage and intensity of their sound thanks to their Evolution systems.

Output, Marquee and Studio 299 – all in New York, The Exchange in Minneapolis, Dog Patch and The Midway – both in San Francisco, Provocateur in Dubai, Lux in Lisbon and Bassiani in Georgia to name but a few. Even a substantial stadium installation in Russia has benefitted from a customised Evolution system. Then there are the festivals and events: Burning Man, Notting Hill Carnival, Space Ibiza Opening and Closing Fiestas, The Hydra, Secret Garden Party and Boom Festival have all seen successful outings for the Evolution Series.

Evolution Series loudspeakers are highly powerful and efficient with great control.  They deliver effortless clarity and openness of sound for immersive and memorable audience experiences.

Audio Feed’s Will Wright, speaking after supplying a number of stages at Secret Garden Party, commented: “This was our first outing for the Evolution Series and I was particularly excited about hearing some live vocals through those new 10-inch Axheads®. I was not disappointed. Frequency response was spot on, but the real excitement came from the overall energy that the system seemed to deliver. The transients in the mid-range were constructing one of the most stable stereo images I have ever heard in a live situation. Eyes closed and I really couldn’t tell you where the speakers were.” 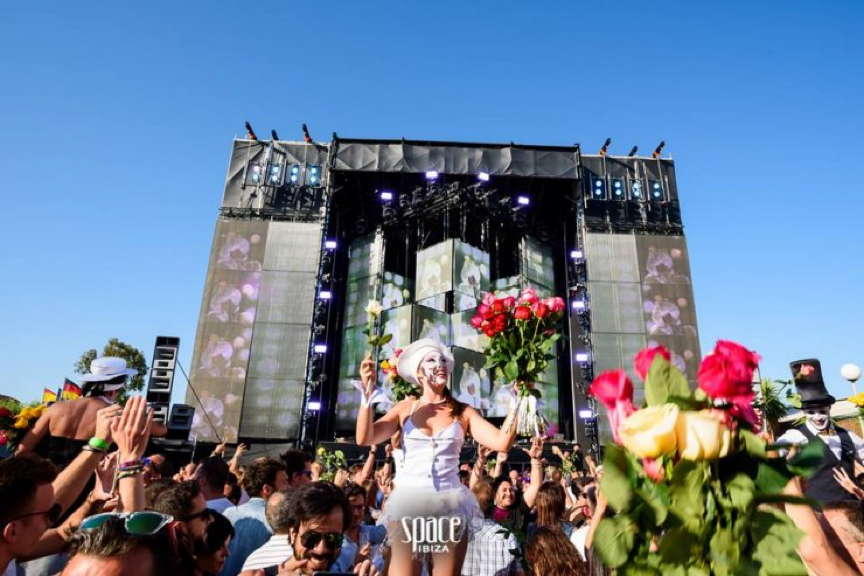 Kit Willow Podgornik returns to fashion week with her sustainable, ethical and very desirable KitX label. “KitX is a new brand and it’s exciting to be able to do an intimate and beautiful show.”

“It takes something special to get the fashion crowd off-site in the middle of Fashion Week, but designer Kit Willow just did it. Celebs, bloggers and fashion media flocked to the Paddington Reservoir on Wednesday. To say show-goers were blown away, would be a serious understatement. To the haunting sound of an Orchestra and soloist, the models walked in the designer’s most beautiful collection to date.” (POPSUGAR 18th May 2016) 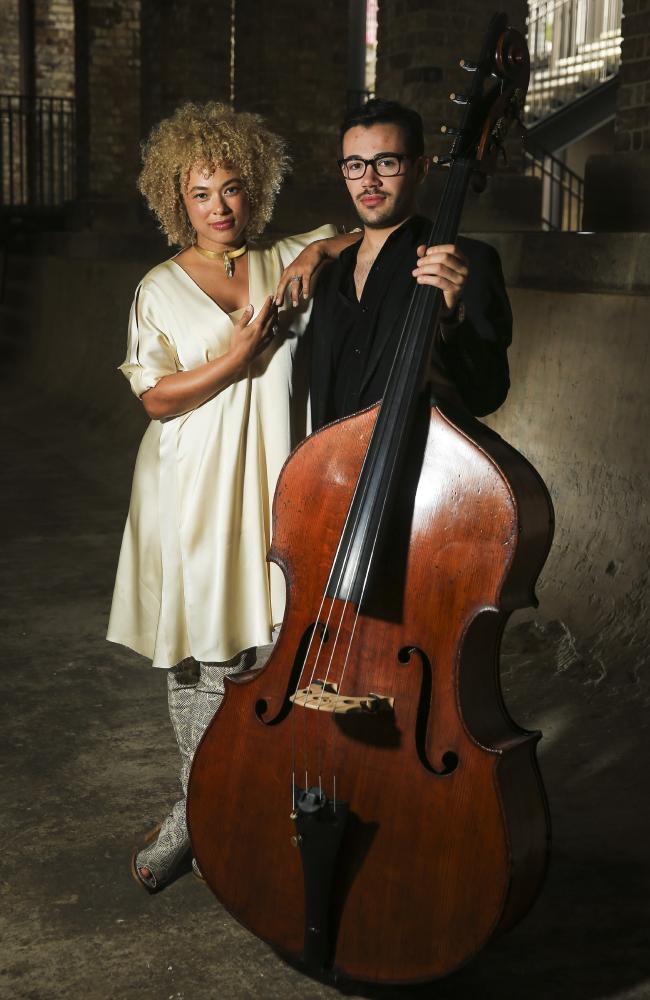 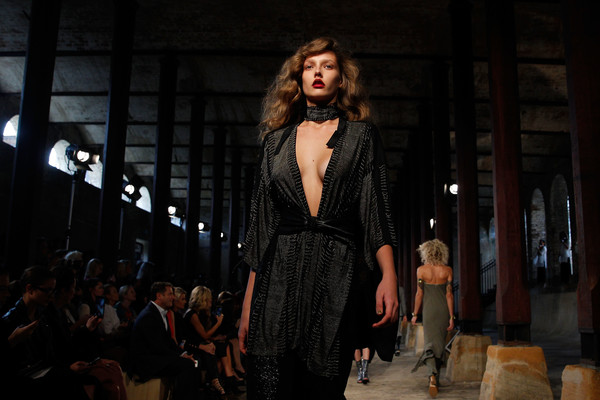 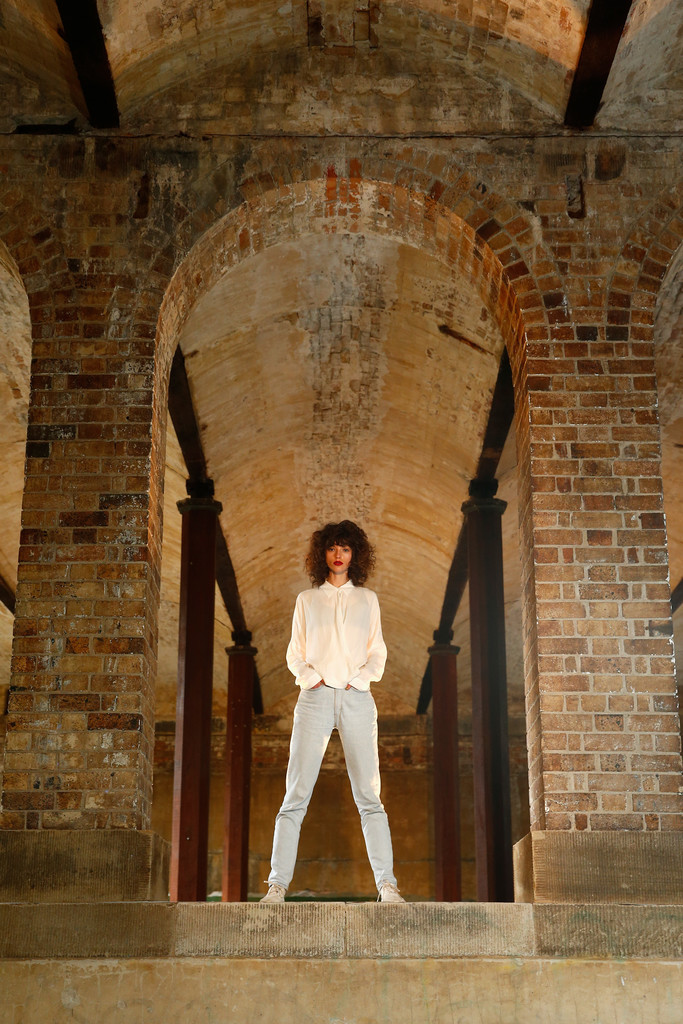 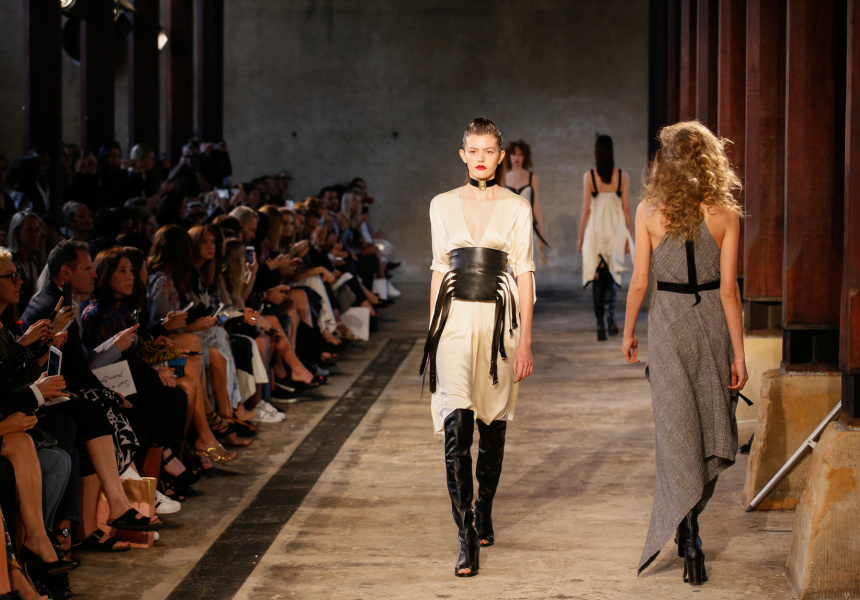 “KitX was so beautiful. The space she showed in added the most complementary ambiance to the clothes. A combination of the orchestra and Connie [Mitchell of Sneaky Sound System] singing live made it a bewitching show. ”

Premium audio quality is the most important principle here at BUMP Productions, which is why we are proud to offer Funktion One speaker rent throughout Sydney.

We are determined to achieve the highest possible sonic accuracy through our professional services, and our unique approach circumvents the need for both compression driver mid-range (with its inherent distortion and hardness) and system EQ (with its inherent phase and headroom problems).

Funktion One loudspeaker systems are designed to offer outstanding direction control, which allows sound to be directed to where it’s needed most while dramatically reducing the impact on the surrounding environment – particularly outside the venue.

One of the key advantages of the Resolution system’s design is that it maximises efficiency when converting power from the amplifier into acoustic energy, serving to produce an alive, more responsive sound. This also means that the system is far more energy efficient in comparison to the competition due to the lower requirement of electrical power.

Funktion One speaker rent: enjoy an award-winning system trusted by the professionals

F1 sound systems have gained an ironclad reputation in the events and entertainment industry, and have been used by world-famous events and acts such as the Chemical Brothers, London’s Millennium Dome central show, Glastonbury Festival and Space Ibiza, just to name a few.

Hire for your event from the sound and lighting specialists

Thanks to BUMP Productions, Funktion One Speaker rent is now available in Sydney at an affordable price. No matter the event you are hosting, make it one to remember with the premium-quality sound and reliable, intelligent design of this award-winning sound system. From standard Funktion One Speaker hire kits through to comprehensive packages with audio visual, microphones, DJ equipment and more, we’ll guide you from start to finish; offering our extensive knowledge from the hire phase right through to installation and support.

Contact our event sound and lighting team today by calling (02) 9699 1166 or by filling out the online contact form. Whether you need the equipment urgently or you just have a general enquiry, we will be more than happy to provide you with any information you need.

Pioneer DJ’s flagship set-up is taking a giant leap into the future, as we unveil the CDJ-2000NXS2 and DJM-900NXS2. The result of years of feedback from DJs of every genre, the latest additions deliver the highest possible sound quality, finely tuned features and unprecedented levels of control.

Pioneer have given the CDJ-2000NXS2 a 96 kHz/24-bit sound card and added FLAC/Apple Lossless Audio (ALAC) support – paving the way for more producers to create music in this top quality format. Browsing and track selection are even more intuitive with the high-res touch screen, Qwerty keyboard and Track Filter search. The screen also packs in a multicoloured wave display, more detailed rekordbox™ information and instant access to all the most popular features. The player now has 2 banks of 4 Hot Cues – 8 in total. And, if that isn’t enough, you can connect the DDJ-SP1 controller to add even more Hot Cues and loops and control 4 players from one device using Pro DJ Link.

The DJM-900NXS2 takes mixing to another level with our first ever 64-bit mixing processor for a more natural, warm and detailed sound. The controls are even more responsive, with a new gain structure, improved EQ and fader curves. The Sound Colour FX section now has a parameter knob for even more nuanced manipulation. Plus an independent Send/Return means you no longer have to choose between Beat FX and external FX: you can connect your choice of external FX controllers, including apps on your iPad, and layer it on top of the on-board FX. Add to that 4 phono inputs, DVS support and 2 USB ports for easy connection to PC/Mac – and the DJM-900NXS2 is a crucial tool versatile enough for any professional booth.

“I played a couple of tracks on the DJM-900NXS2 and I was quite astounded, it sounds like no other Pioneer DJ mixer I’ve heard,” said Andy Kayll, sound engineer at DC10. “Going up from 32-bit to 64-bit, the sound is so much more accurate and natural, you can hear it’s much warmer.”

THE DOLPHIN HOTEL OPENS ITS DOORS

THE DOLPHIN HOTEL OPENS ITS DOORS

BUMP Productions were proud to be a part of the team behind the new look Dolphin Hotel, Crown St, Surry Hills. If you’re in the area, we highly recommend the crab spaghetti and twice-cooked pork belly.

It’s been a nail-biting wait for The Dolphin Hotel to open its doors on Crown Street in Sydney’s Surry Hills. The work of Maurice Terzini and the Hotel Harry team with Icebergs chef Monty Koludrovic in the kitchen and James Hird in the booze camp, the site has been on the verge of completion for weeks. – Sophie McComas Gourmet Traveller

A simple philosophy behind the project, authored by George Livissianis, is a pop-up approach of re-use and re-adaptive design principles. If the elements have integrity they are preserved, if they can be stripped back to raw they are stripped and if they aren’t suitable, they’re wrapped in a Christo inspired installation process. The spaces are punctuated with artistic highlights by friend and ‘artist in residence’, Beni and sculptor / installation artist, Tracey Deep – Team YellowTrace, June 3, 2016 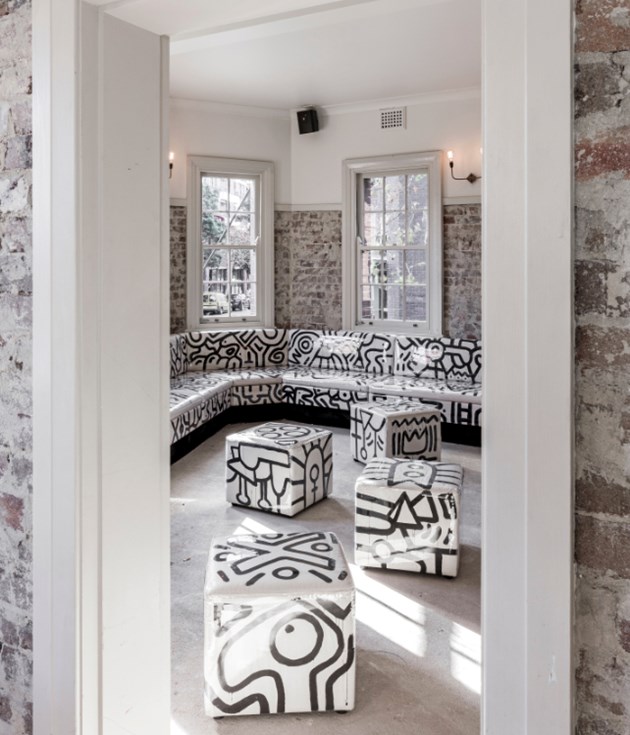 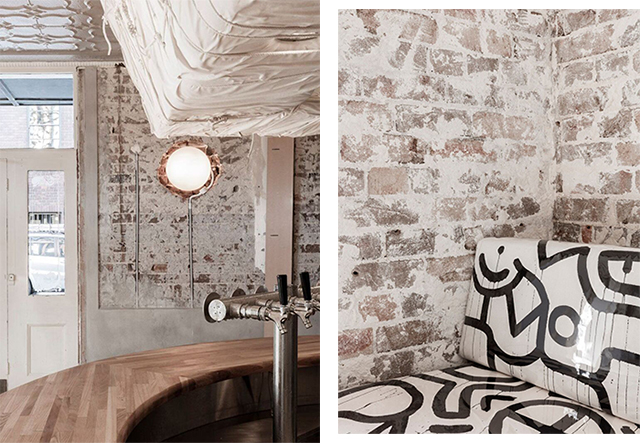 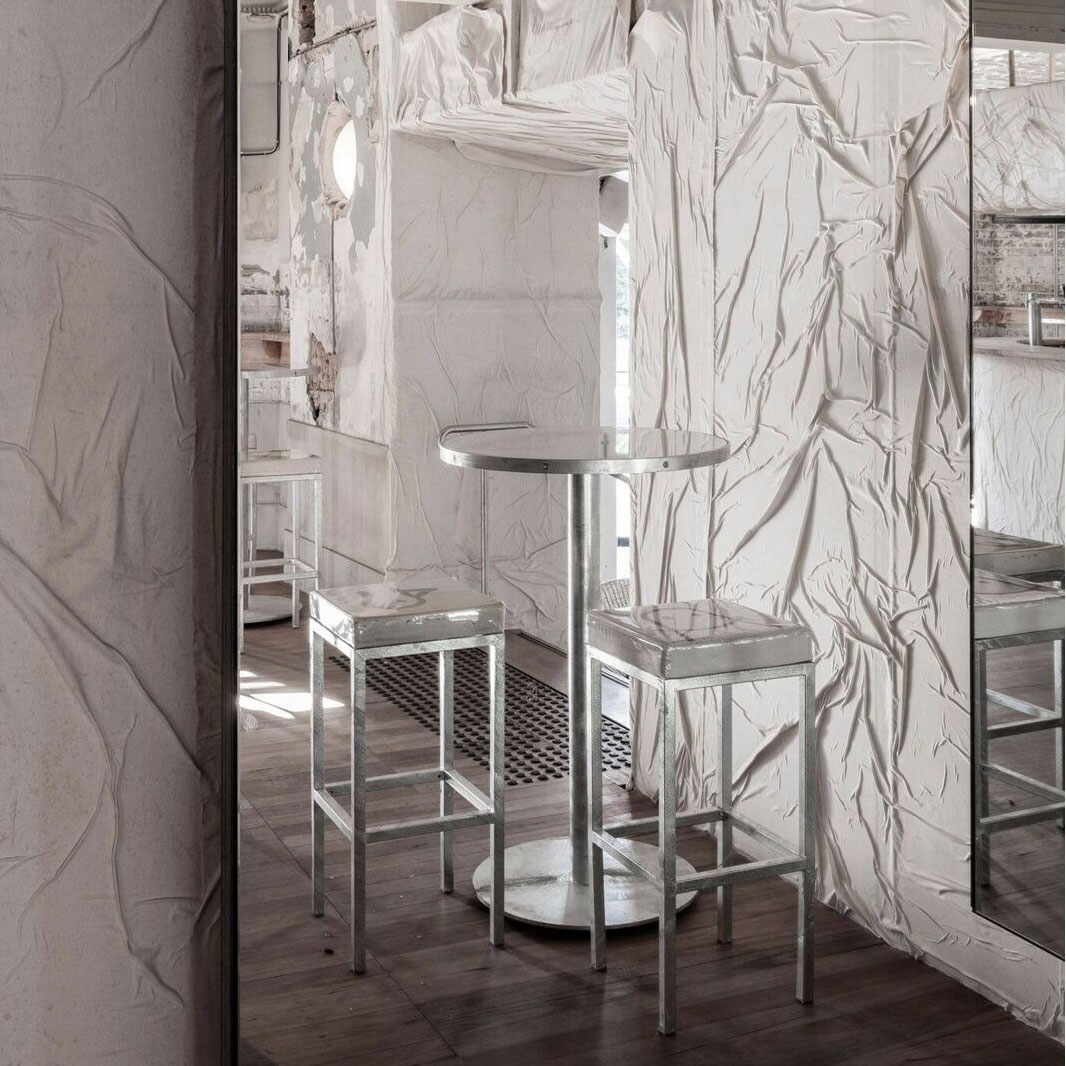